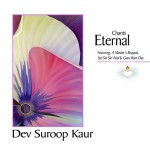 During one of his classes in Espanola, New Mexico, in the Autumn of 1999, Yogi Bhajan requested that “A Master’s Request” be composed to celebrate his life, not mourn his death. He specifically requested that it be written in the past tense as if he had already passed away. His intention was that we be comforted, uplifted and joyful with his passing and that his life, our mission, and our future be celebrated.  When we played the song for him, his words were “It’s perfect. Don’t change a thing.”

It is with humility and immense gratitude to the life and legacy of Yogi Bhajan that I present this song and the accompanying soothing mantras.