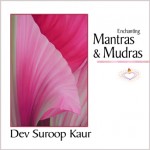 The legacy of Mantra and Mudra and the sacred science of the sound current was shared and further codified by Yogi Bhajan. Each of these musical meditations opens an inner gateway to your spirit. They reach beyond the confines of language to tap the sacred power of the Word. The use of special hand and eye positions with the mantra is called “mudra”. Each mudra is a “seal”. It enhances, speeds and assures the impact of the mantra.

The physical CD includes meditations and mudras given specifically by Yogi Bhajan for this album.

This was my first recording project. Yogi Bhajan gave me the assignment to record these seven mantras plus the shabad Narayan which I recorded a couple of years later. This was an interesting and rich project in many ways. Yogi Bhajan provided all of the mudras to go along with the recordings. He also provided many of the translations. This was also the first time that Liv Singh and I worked together. Our creative partnership has continued through all my other recording projects.