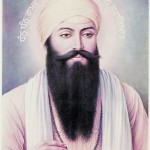 The particular melody of this mantra is one that we have been chanting for many many years in Gurdwaras and yoga classes.

This is a mantra of humility, relaxation, self-healing, and emotional relief. It calls on the spirit of humility and grace of the realm of Guru Ram Das, with its spiritual guiding light and protective grace.

I recorded this piece in 2009 during a time of deep healing from a broken ankle and subsequent surgery. I was 38 days into a 40-day Sat Kriya meditation when I slipped on the ice and entered the new reality for me of broken bones. I actually attempted to continue Sat Kriya on my back and while doped up on pain killers. I quickly learned why we don’t practice Kundalini Yoga that way! The energy moving around was simply too much. So I chilled out and moved through an entirely different pace of gentle and profound healing.

After a few months and when I was actually able to walk again, I contacted Steve Chavez in Espanola and recorded this version of Guru Guru Wahe Guru.