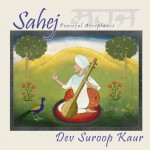 Relax into the warm embrace of this hypnotic presentation of four beautiful songs of the Sikh Gurus.  Sung simply and sweetly in a classical raag kirtan style, Dev Suroop Kaur’s sublimely healing and crystalline voice will transport you to the realm of your spirit. Accompanied by the rhythmic tones of tabla and the soaring voice of violin, alto flute, and clarinet, these compositions are a feast for the ears and heart.

This album was inspired from a deep love and respect for the vidiya – the study and knowledge – of Sikh Classical Raag Kirtan.

I was blessed to begin studying classical Raag Kirtan in 2001 with Bhai Avtar Singh Ragi and his son Bhai Kultar Singh Ragi and I have been studying and practicing, slowly but surely, ever since. Playing classical Indian music is one of those extraordinary things in life where it’s very clear that the more you learn, the more you know there is to learn. Gurprakash Singh, Gurujot Singh, and I enjoyed several years of playing classical kirtan together in Espanola. Before Gurprakash Singh returned to India to work at Miri Piri Academy, I decided to record this album that turned into a wonderful project to honor our time together as a jetha – a group of musicians who play spiritual music together regularly. Gurprakash played tabla on the album and Gurujot did all of the graphic work, including the original painting on the cover.